There's a page entitled 'Growing up in the 50s / 60s which has images from those times. 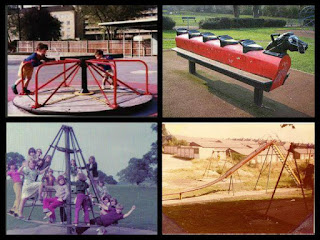 Here are some of the roundabouts, slide and 'horse' typical of playgrounds then.

My local park had the roundabouts just like those pictured. We called one of them the 'Witch's hat' or 'Umbrella'. Beginning by sitting on the planks, soon we graduated to standing and then climbing up the bars. Often there was a 'competition' to see who could climb highest and stay on as the roundabout not only went around, but also swung from side-to side. No idea why, but the nickname 'Daz' springs to mind. Must have been one of the older ones responsible for making it bash too and fro. I still remember hanging on for dear life, yet enjoying it at the same time.
The small roundabout was a challenge to get on whilst it was spinning. Sometimes older youngsters would spin it faster and faster. Again us littlies needed to do our best to cling on.
As for the 'horse' the one pictured looks like one I knew in a park in Derbyshire (Pavilion Gardens, Buxton). This 'posher' version has seats and 'running boards', a more staid version than the local one. Again, older youngsters would come and make the 'horse' rock faster trying to get the younger ones off.
The slide had a cinder path surround, imagine the H&S response today! I still have scars on one knee from falling on the cinders when coming off the slide.


Looking back, playing on all these rides must have been good exercise. What a contrast to today!
Posted by joanygee 2 comments:

...or more precisely a storm in a tea cup.

Auntie Beeb has done it again, she's making changes that ordinary folk might not be too pleased about. It has certainly come as an unwelcome change to me.

For over 90 years the BBC has been broadcasting weather reports, and useful too. Now a decision has been made to use another provider for the reports. Out with information from the much respected Meteorological and in with t.b.a.

Apparently it is a cost-cutting exercise.

Wonder who will provide the forecasts in future? As far as I am concerned, the best, most accurate records come from the U.K. Met Office; they've been doing it for over 150 years!

Monday 1st of August 2011 was a very special day for the Met Office. They celebrated 150 years of forecasting for the nation, and marked the anniversary of the first ever appearance in print of a public weather forecast.

Social media has been agog with all and sundry expressing views about the Beeb and the Met. Office.

Problem being it made me realize that the 'average'  person has little, if any accurate knowledge of meteorology. The cynic in me says that when the Beeb dumb-down the forecasts by using a.n.other provider, Joe Public will probably be none the wiser.

At least, I can continue to access 'proper' forecasts from the Met. Office web-pages.
Posted by joanygee 3 comments:

Part of the lyrics from Paul Simon's

'April, comes she will'

countryside along the banks of the River Ribble.

The memories are vague, as it is so long ago, but I have been in and across Waddow's grounds. In, with the Brownies (probably) and across taking a short cut thro' the grounds. 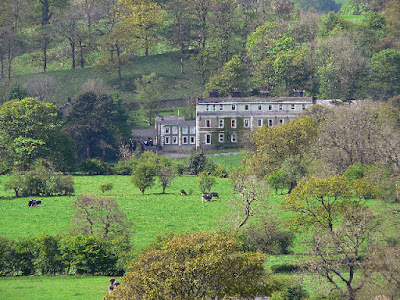 For a long time now, it has been a centre for the Girl Guides Association. In these modern times, it has also become a Conference Centre.

It's even part of Lancashire Folk Lore in the tale of Peg O'Nell and her well.

The Lancashire market town of Clitheroe is on one side of the Ribble with the village of Waddington and Waddow Hall on the opposite side. For centuries, as is common in England, the river formed the county border.