A long, long time ago in Lower 3 Alpha, two of the same form were tasked with writing. Nurse Bradshaw from towards the end of the street had spent several lessons telling 11 year-olds about the 'facts of life'.

At the end, we were tasked with imagining our future. Nita, was taken to task because she had written about a feminist future...sans children and sans husband.

Move on over 50, yes 50+ years later. the go with the flow friend has never married. In fact has shunned the institution of marriage. By contrast...her non-conformist BFF has done the opposite. Nita twice married, two sons from marriage #1 and 1 daughter from marriage #2.

Where have all the flowers gone

Long time passing...
Peter, Paul and Mary's song comes to mind today.
Over the last few weeks, I've come across good news, not so good news and downright disturbing news and events.
Okay, tempus fugit applies and is irreversible. Some things and events it's good and a relief to consign to the past. Others cannot fade fast enough.
This time last year, world news was awash with events in a small settlement known as Whaley Bridge, where part of a dam wall was threatening to collapse leading to inundation from Toddbrook Reservoir. The emergency services responded to the challenge, and with the aid of the RAF and a Chinook helicopter, the wall was stabilised.
Twelve months on and plenty of civil engineering works later, the threat to Whaley Bridge has diminished.
Long time ago...
Reading recent posts, I came across comments on a paragraph from an old newspaper, The report concerned domestic coal fires and the consequences of allowing soot deposits to build-up in the chimney. Intrigued, I read some of the posts, only to find that no-one understood the seriousness of the incident.
Having grown up in houses heated solely by a coal fire in the living room, time for me to realise once more how long ago that was. My first home was in a terraced house, commonly referred to as 'two-up two-down'. Downstairs the front door opened straight into the front room. No fancy names, simply front room. The stairs leading down from the two upstairs bedrooms being between the front room and kitchen, The front bedroom had its own cast iron fireplace. It was rented accommodation, even today it is still leasehold. It had sash windows with wooden frames.
Back to the article on chimney fires. Coal fires produce smoke, heat, soot and ash. Chimneys needed sweeping to remove soot deposits and prevent soot building up to a dangerous level. Chimney fires were a well-acknowledged hazard. In a terraced house, soot build-up was even more dangerous. A chimney fire could not only set fire to the chimney from floor to roof, it could spread to other houses in the row via the roof space.
Posted by joanygee No comments:

Here I must give credit to someone on Facebook who published the idea, 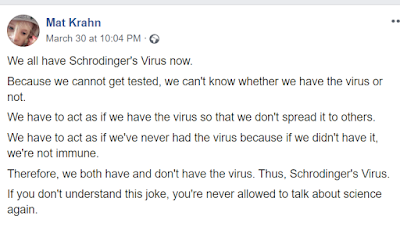 Seems appropriate in these challenging times...

Another challenge being wakefulness, not 'insomnia' as its nothing like as serious as that.

Last night of rather this morning 2 a.m. the GSD girlie wanted to go out, so, out we went down and around the back garden. 5 a.m. similar, then 8 a.m. and finally time to 'rise and shine'.

Yesterday was an unhappy day because of sad news. 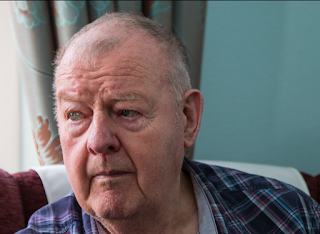 Albert died in hospital where he'd been for a number of months.
Father-in-law of my best friend.
A lovely, traditional Lancastrian.
Courteous, welcoming and kind-hearted.