Mill towns used to shut down for a fortnight each year, during which, maintenance was done on machinery in the cotton mills.

I grew up in the mill town Clitheroe, Lancs. in the mid 20th century when Wakes Weeks still survived. The various towns closed one after another, so no two were on 'holiday' at the same time. Families used to save up all year to have money for the fortnight because they weren't paid while the mills were closed.

Even in the 1950's - early 1960s, the tradition survived, and people by then had holidays with pay. Essential shops (grocers) opened in the mornings, newsagents sent lads to sell newspapers in parts of the town (mornings).
Posted by joanygee No comments:

Show me in pictures and/or tell me in words, what defines the place where you live.
First has to be The Bridge
Wherever you go, no matter how you travel you see the Bridge. Should the bridge be impassible or lanes reduced the whole area for miles around snarls up with traffic.

, a fancy photo sharing thing.
Posted by joanygee No comments:

began with warnings of severe weather particularly for SE England. Commentators remarking on the 'worst snow for 18 years' and the number of school closures.

1963 winter was much more severe, the River Ribble froze; I walked there with Dad to watch people on the ice; including a professional ice skater. 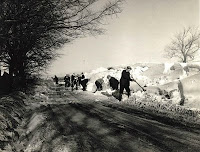 Schools remained open, I walked to school thro' lanes and streets banked up with snow.

No-one considered staying home even when they had to dig themselves out of their houses.

Steam trains kept running, Beeching hadn't yet axed most of the lines.
Moving on to grammar school, they too remained open throughout snowy winters. Anyone local remained in class, whilst those bussed in were sent home.

Mid 1970s at college in Liverpool, trudged along Queens Drive through the snow to attend early morning lectures, only to find them cancelled.

The school I worked in 1975-2002 also refused to close in winter. One memorable occasion, the heating failed, pupils were sent home, yet the Head insisted staff stay at work.

Staff were obliged to report to work whatever the weather on penalty of retribution by the Head .
Posted by joanygee 1 comment:

Now to link them

Neil Oliver was presenting his History of Scotland programme about Mary Queen of Scots.
He reached the part in her life where she married Hepburn.
The name had connotations, reminding me of sixth form English Literature studying Chaucer.
BBC2 were broadcasting Chaucer's Pilgrim's Progress. In those days few homes had TV with BBC2
Only one person had BBC2 her name? Hepburn

A group of us went to watch the programme at her house.
Posted by joanygee No comments:

I have uploaded to Picasa