returned to Lowry, Lyric theatre this time to see "Brief Encounter" loosely based on the Noel Coward film of the same name. But, Noel Coward didn't have comedy in his film. Kneehigh Theatre Company injected their own comedy highlights into the production.
A miniature steam train crossing the stage.
Betty the waitress on a kid's scooter.

Lunched at Pan Asia, even quieter than last week, but the food was just a good. 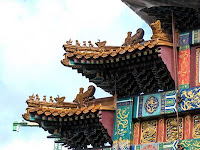 This time we took the Metro tram to Boundary, one stop later but similar distance from the theatre. Caught the return tram from there, managing the be seated unlike last week. We got to Oxford Rd. station in good time to get an earlier train, arriving back half an hour early.

Last theatre production for me to visit until July. Barbara's going in June to see Cabaret. I'm going with her in July to see West-side Story.
Posted by joanygee No comments:

Wednesday and trip to Manchester (with Barbara) to the Lowry Theatre. Train from Hough Green to city centre, stroll to the Chinese Arch and Panasia restaurant (all day buffet).
Metro (tram)to the Lowry.
Calendar Girls

Hoping will lunch in Chinatown at the Pan Asia.
Posted by joanygee 1 comment:

Sadness clouds my world, Liz is dead!
In February 2007, Liz wrote:I've got my medical retirement; now I can take life off hold..(fibromyalgia).


In June 2008 - I've been having trouble with my eyesight for a while now - despite getting a new prescription last November. I've been perceiving things as "dim", noticed a slight change in my colour vision, and occasional difficulties in seeing things in certain areas of my peripheral vision, as well as increasing difficulty with "normal" sizes fonts & print.

She was diagnosed as having a sub arachnoid haemorrhage...

Someone I knew years ago on having a similar diagnosis was immediately rushed into hospital (Walton specialised in brain surgery) and operated upon successfully.

"Down, down, down into the darkness of the grave
Gently they go, the beautiful, the tender, the kind;
Quietly they go, the intelligent, the witty, the brave.
I know. But I do not approve. And I am not resigned."

time it was, I have a photograph 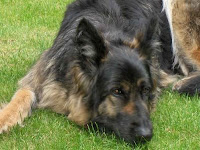 Preserve you memories, they're all that's left of you (to paraphrase Simon n Garfunkel)

Today, my god-daughter arrived with her mother (my one true friend).
S ought to have attended a business meeting, but 10 minutes away from here, she had a message to say 'Meeting cancelled'.
Having almost reached her destination, she continued and arrived to spend the morning here.
Conversation ranged across topics old and new, as it does when we get together. A n I go back some 45 years so there are a lot of memories.
Dogs as in GSDs figure largely, from the original Shan, thro' Sheba, Major n Kira to our present day canine companions.
Shan was favourite when S was but a toddler, Sheba took over followed by Major.
Toddler S arrived to see Auntie Joanie, barged her way past two puzzled barking dogs saying to them "'lo dogs" then "bye dogs" as she made her way to me.
Another time, S was playing with Major whilst the adults chatted in the garden one sunny summer afternoon. Voice called out "the dog prickled me!"
D quickly extracted S from the pyracantha into which she had tumbled.Even today, S remembers the event well
Posted by joanygee No comments:

March arrived taking me completely by surprise.
Last couple of weeks have been eventful. GSD girlie diagnosed with pyometra (infection of the womb), fortunately, we got her to the vets in time and she was operated upon.
Pyometra is a silent killer if left untreated.
Posted by joanygee 2 comments: