Your dead exceed your alive and the nos of dead keep on rising. One week ago it was Farewell to a dear friend, mentor and fount of wisdom. For over a decade she replaced the wisdom I'd relied upon from folks now deceased. We'd shared, accounts, reminiscences and attitudes common knowledge to us both.

To every thing there is a season...

A time to die

A time to love

and so on and so forth

In my family, the dying ages have been 37 and 73 with but one remarkable individual achieving the age of 90.

Impossible as it may seem to those far younger, DEATH has become a constant companion. If only it was Terry Pratchett's Death more rounded and yet more wholesome.

Numerous ads promote getting rid (disposing) of loved ones as mere corpses to be burnt without beel, book, candle or ceremony.

To quote Edna St. Vincent Millay " and I am not resigned"

Gannets feed by flying high and circling before plunging... An apt description of the coffin-chasers' attracted by the idea of gaining from someone's demise.

Have only just returned from a final farewell.

To say my hackles rose is to put it mildly.

My recently departed friend has had her funeral interfered with, modified by the Gannets.

'M' was a person of Maths, calculations and organisation to the nth degree. She did not care much for music. Hence, my ire as 'Onward Christian Soldiers' blared out from loudspeakers.

The Gannets had co-opted a priest to conduct the obsequies. Poor man being typically ill-informed; went thro' his prepared discourse.

'M' followed football EVERTON... So, priest burbling about Liverpool showed how out of touch the Gannets are.

Her business MJM standing for Mavis, Joseph and Mary.

When she took up 'working' for charity; MJM became the Christian names of the three neighbours.

Then Lois attempted the Eulogy, proof positive of the family's ignorance. Called her and the rest of the Gannets 'next of kin' being a glaring misnomer. She spoke, but her words only served to show how estranged the Gannets had become from 'M'.

No love lost and 'M' typically forthright excluded with reason one of their number. She told her solicitor there must be nothing for 'R' he's a criminal. That made the solicitor blench. 'M' had her way!

The  deliberately kept away from 'M' for over two decades. Little wonder they were ignorant knowing naff-all that really mattered to my friend.

Breaks in a routine

Only one week ago, my friend lost her final battle with illness.

Thursdays used to have a certain pattern. Shopping for groceries, followed by putting newly-bought chrysants in vases.

9.30 usual visit to next-door-but-one, taking groceries for 'M'. Being welcomed in, staying to converse and to catch-up with any gongs-on for about an hour. When traffic became busier, changed meet-up to 10 am. Similar catch-up just a bit later.

Arranging to return c1.30 on Fridays for a cuppa and chat. Laughing and generally enjoying the company. Topics ranging far and wide.

Several months ago, 'M' had what at first appeared to be a health-scare. Going the rounds of several hospitals and clinics. Starting with journeying to hospital on the Wirral. Time-consuming and expensive as she had to go by taxi. Blindness having robbed her of being able to drive several years ago.

Managing to transfer to a slightly nearer hospital. Being treated like another package needing to be processed. Only to find that the medics now confine their attentions to tick-box 'treatment'.

Arriving in time for appointments, only to find long, lengthy waiting times. Hospital focussed on single ailment to be investigated. Completely overlooking several other problems, diabetes (type 1), hiatus hernia nick-named Heidi to name but two. 'M' had dietary restrictions caused by 'Heidi' and diabetes. Nothing about these problems seemed to get thro' to hospital staff. Focussing solely on 'their diagnosis' to the detriment of 'M's' welfare.

By Thurs. next week the final farewell will have been said and done.

M is in my thoughts many times a day. Almost comforting remembrances.

She was a stalwart for so many people. Numbers and maths were her speciality. Even after sight loss she helped as in advised people with mathematical necessities. Those people will feel the loss of her patience and expertise. Perhaps it will also lead them to reassess their dealings and be thankful to her for all her efforts.

I'm going to treasure my memories and welcome thoughts reminding me of our routines,

Not so much a Country; as an overlarge Play-group

All those years ago, he could never have known how true his descriptor would turn out to be!

He was describing the antics of the inhabitants of most of a large landmass. (Western hemisphere).

Today, we have become all too well-aware of the dis-ease (not 'disease') spreading like a miasma throughout the Western world in particular.

A term much used by a former colleague springs to mind 'whited sepulchres'. Or ought it in today's parlance be 'blackened sepulchres'... sounds about right.

Vol I, II and III

You are absorbing the news that someone you cared for has departed this Earth. Tis enough to cope with, without the coffin-chasers appearing, crawling out from the woodwork like cockroaches.

Over a number of weeks, I'd become accustomed to phone-calls from my friend. We'd meet for a cuppa and chat. As the weeks went by, it became meet-up and chat. We did our usual putting the world to rights. Agreeing naturally over so much we had in common.

I became concerned that she was having to cope with not only severe pain, but also 'well-intentioned' bullying.

Unless you've already experienced it most folk would never understand.

When so-called family distance themselves for over two decades, they lose any options on appearing to be next-of-kin. 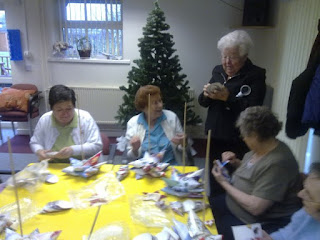 Gradually, macular degeneration robbed her of her sight. She was a natural mathematician. This was the skill she used to navigate the world as her sight deteriorated. It was from her, that I learnt to appreciate what sight loss actually meant. It amazed me. We caught the bus and she counted the stops. Effortlessly telling where we'd reached along the route.

The image shows her teaching a group of sight-challenged people how to do crafts.

Carers accompanying the visually challenged often refused to accept that my friend was blind.

Another pet-hate of hers was to come across people who insisted on assuming blind people ought to be treated like vegetables and left to rot in a chair.

Over the years, I experienced with her the in-built ignorance and bias against blind people. The daily assumptions that everyone everywhere always has all faculties.

My friend must have been in extremis for several months. We adjusted to calls for us to leave everything and go to her aid. For someone so independent it must have been such an indignity to call for assistance. As I kept telling her,' You are the only one I've ''got' and you ar special to me.

For several weeks, we went round to help her up after a fall. The liver cancer robbed her of as much as it could.

Now, I cherish the occasions when I was able to help and to comfort her. Helping her back on to her feet, gently holding her upright in my arms; assuring her that I was 'there' for her whatever happened.

A fortnight ago she chose to go to hospital. The writing was on the wall. That first few days she phoned and we chatted.

Next, came the impenetrable silence.

“Farewell," they cried, "Wherever you fare till your eyries receive you at the journey's end!" words by J.R.R. Tolkien.

Words that seem to grow in importance.

Next-door-but-one lives (d) a wonderful neighbour and friend. Until recently, a cancer survivor. Someone to cherish and not very long now someone to mourn deeply.

We've knitted and nattered, crocheted and 'put the world to rights for over a decade'. A survivor in many ways right from birth.

Even thro' her illness this summer, she'd phone for a chat. Whenever possible, we'd meet up for a cuppa and to share reminiscences. Both of us having lived thro' similar times, but I'm considerably younger. Similar no-nonsense approach to life and times.

Now, she's been in hospital for a while and typically, she's refused visitors. She's typically doing everything her way 'right to the end'.

Family estranged themselves from her for over 20 years.

Cynical me knows from experience, that when a death in a family is in the offing, all and sundry emerge like woodlice from under the skirting boards. Faining a closer kinship than ever was warranted; they gather like corvids at a feast on the remains.

My neighbour has planned to have her 'last laugh' for a number of years. None of the alleged kith and kin are to be allowed access in any way, nor to any monies in particular..

To quote the Window Cleaner, "They always take the best ones".