pro patria mori... poem by Wilfred Owen telling of part of his experience of WWI.

Hugh Dennis (actor and comedian) is one of the people whose family history (part of) has been broadcast by Auntie Beeb. The first thing that surprised me was Hugh's father addressing him as 'Pete'.

Hugh's branch of the Dennis family
Father - John
Grandfather - Hubert Ronald (Ron to his family) born 1899 (1901 census)
Great-grandfather - John (coal hewer) wife Edith known as Edie.
John came from a village in Yorkshire (Kiveton Park) and worked in Kiveton Colliery.
The two sons were born in Wales a nearby village.

Hugh meets up with Eric Chambers of the Kiveton and Wales Historical Society.
Next he goes to Wales Primary school where Keith Laybourn shows him the Roll of Honour. Both of the Dennis brothers, John and Ronald, gained scholarships to Woodhouse Grammar School from the Wales Educational Trust.
Edith and John saw education as the way for their sons to escape working in the colliery. Most local families depended on the mine with generations working down the pit. 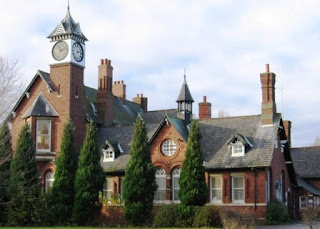 
© Copyright Dave Bevis and licensed for reuse under this Creative Commons Licence
June 1917
Ronald joins the army and is seen as 'officer material'. He joins a group of Army cadets at St. John's College, Cambridge on a six-month course to become temporary officers. The attrition rate amongst junior officers was so great that the ranks of public school educated officers were being supplemented from Grammar schools.
Hugh also went to the same college (1980s).

In WWI the Army had taken over some of the colleges and turned them into training centres for officers. These temporary officers were given a quick course in behaviour and social skills expected of Officers, passing the port, dining in medieval surroundings in the college. An alien world, just as alien as when the brothers from a mining family went to grammar school.

Ronald arrived in France in October 1918. We the benefit of history we know it ended in November.
Imperial War Museum military historian Nigel Steel showed Hugh his grandfather's Medal Index Record.
Temporary Officer Hubert Ronald Dennis arrived on 12th October when troops had broken away from the trench war stalemate and it was now chaotic mobile combat.
Ronald found himself near Arras and the River Sombre. He was platoon commander of some 30-35 men and he was only 19 years old.
They were sent to capture the village of Futoy. Fighting through a mile of German troops, they captured the village, but with heavy losses.
13 officers were lost - 5 killed and 8 wounded.
Ronald was amongst the wounded.

Hugh was shown Ronald's medical record - wounded by shellfire fragments in his upper right arm. (Blighty wound) Sent home to recover (2-3 weeks).
After the war Ronald left the army and got married.
He lived until 1990 and died at the age of 91.

Fascinating and I can't wait to see the show for myself!

Actually Hugh is called by his family as Pete/Peter, but there was already an actor named Peter Dennis so he opted for Hugh instead.

I'll have to pass this onto Dad, he'll be interesting. All of dad's side of the family worked in the Kiveton Pit as did a number of the Dennis family.

Kiveton Park and Wales hold a lot of fond memories though, I've visited both places. Dad lived in Kiveton Park all his life until he moved to Australia, mum lived in a few different places before they moved to Wales - where she met dad.

Interestingly though, dad went to Woodhouse Grammar so he'll be interested to learn about those who did before him.